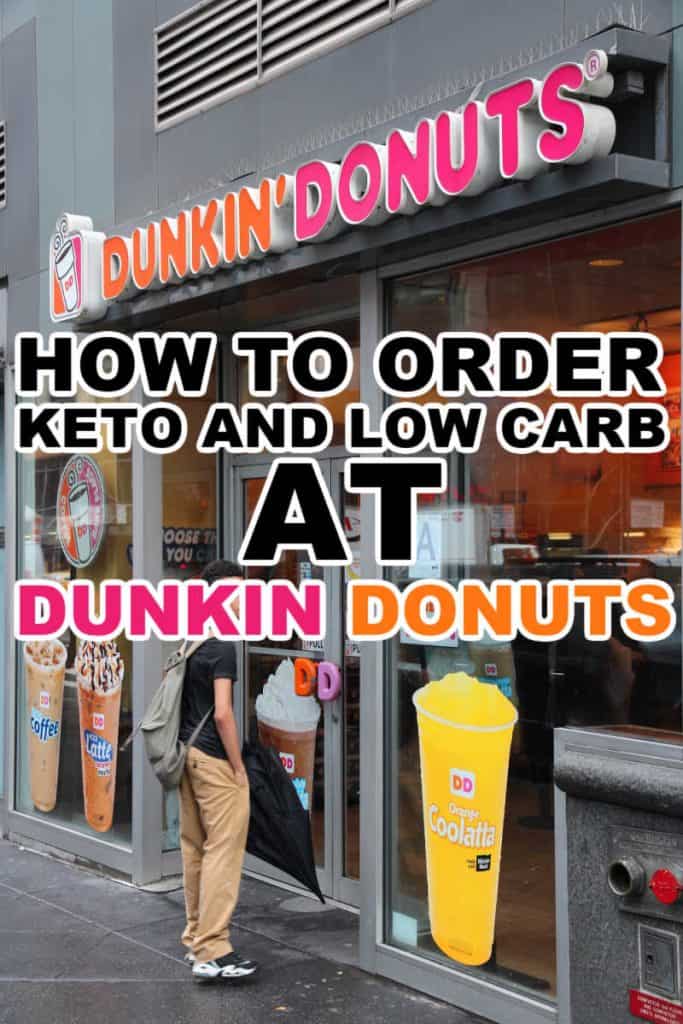 How To Order Low Carb and Keto at Dunkin’ Donuts I am not going to lie, Dunkin Donuts is my all time favorite place to drive thru and grab a coffee. Thankfully it is easy to stick to some tasty treats and grab some low carb Dunkin treats and some Keto Dunkin treats!

How To Order Low Carb and Keto at Dunkin’ Donuts

You can stay keto at Dunkin’, and it isn’t even that hard. With plenty of tasty keto-friendly sandwiches and drinks, Dunkin’ will keep you running — as long as you avoid drinks like Dunkin’s large Caramel Swirl Frozen Coffee with Skim Milk, which packs an astonishing 193 grams of sugar, and 204 grams of carbs! Yikes!

Most of Dunkin’ breakfast sandwiches are keto-friendly once you ditch the carbs on the outside. When you are ordering breakfast at Dunkin Donuts skip the croissants, bagels and muffins and opt for them with out the bread.

If you’re hungry, chow down on an All You Can Meat Croissant (after you toss the croissant) for 460 calories, 38g fat, 25g protein, and just 4g net carbs.

The Sausage, Egg & Cheese clocks in at 370 calories, 32g fat, 16g protein and just 3g net carbs once you chuck the muffin.

Other great keto options include:

The Chicken Biscuit. It’s loaded with carb-heavy breading. Unless you enjoy picking off chicken skin, choose an easier option.

Need a little extra fat to spread on your breakfast sandwich to boost your fat and calories? Dunkin’ butter is, well, butter (0 carbs)!

Stick to the basics for Dunkin’ drinks like black coffee, cold brew, espresso, or an Americano, and avoid all the frozen coffee, frozen, chocolate, Coolattas, and coffee drinks.

Every tea is keto-OK, with no carbs or calories.

An espresso shot has 5 calories and 1 carb.

A large black coffee or Americano will set you back 10 calories and 2 carbs.

A  large coffee with cream at Dunkin’ has 130 calories, 11g fat, 3g protein, and 5g net carbs. Are the carbs worth it? Only you can decide.

What Flavor Syrup Can I have at Dunkin on Keto?

Be careful to ask for a flavor shot, not a flavor swirl! Dunkin’ swirls are sugar syrup that will bust your carb budget for the rest of the day.

What low carb sweeteners can I use at Dunkin?

If you need to feed your sweet tooth, Dunkin’ has Splenda packets — which are technically sugar-free but contain maltodextrin, which can spike your blood sugar. You may want to bring along your own bottle of stevia drops instead.

Looking for dining choices while sticking to keto and Low Carb? Check these out!