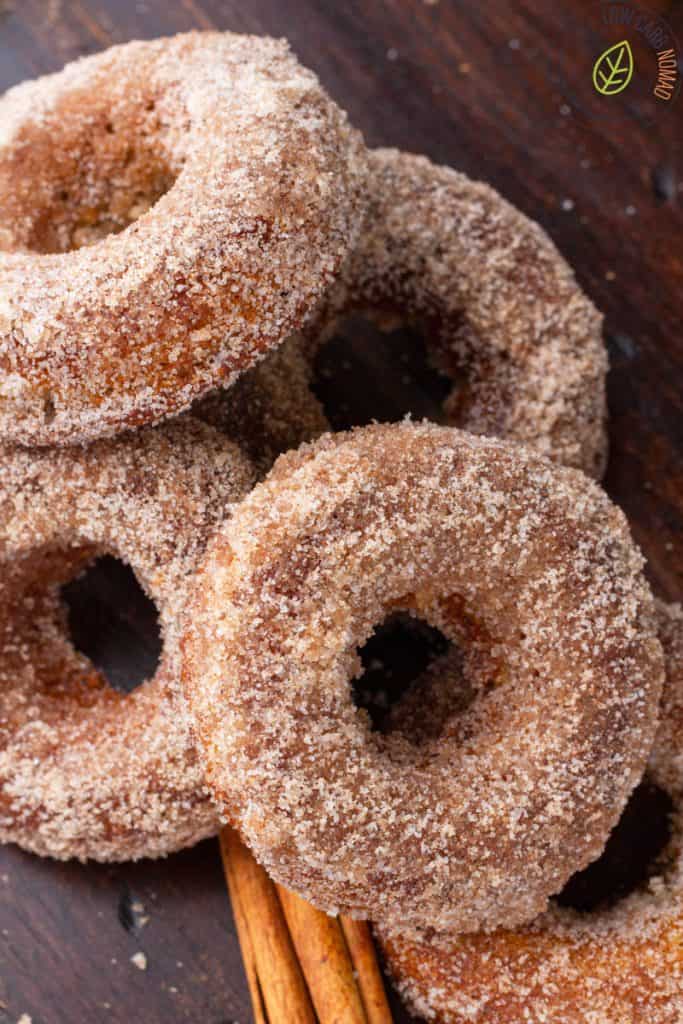 Let me tell you ahead of time that these low carb keto apple donuts are amazing. The perfect apple flavors with cinnamon with out even using apples! My secret, apple extract!

I have been loving my mornings with a pumpkin Spice latte, pumpkin whipped coffee or pumpkin spice frappuccino and a tasty low carb apple cinnamon donut!

When fall arrives I am all about everything I can enjoy that is fall and pumpkin everything is my main fall love. However I can not go a fall season with out enjoying apple donuts, especially when the kids and I are spending a lot of time apple picking.

Every year when we are apple picking at the local orchard I get a batch of homemade apple cider donuts. They are fresh made and totally amazing. Last year I was well behaved and skipped out on having one when I bought them for the kids. This year I decided that I wanted to try my hand at making keto donuts so I didn’t have to miss out.

How to Bake Low Carb Donuts

Because I want to keep my low carb treats, including my keto donuts made with almond flour on the heathy side these low carb baked donuts are baked in the oven instead of being fried in oil. I have found it much easier to make baked keto donuts when I use a donut baking pan, like this one on Amazon.

How many Carbs in Keto Donuts?

These baked keto donuts have just 1g net carb per donut! That makes them perfect for a breakfast, dessert or a snack! They are also perfectly fluffy and full of flavor and no one is going to even realize that they are low carb! You might want to grab one for yourself before letting anyone else have one, or you might not get one!

How to Make Low Carb Donuts

In a medium bowl whisk together the dry ingredients.

In a large bowl whisk together the wet ingredients.

Add the keto donut batter into a piping bag and pipe the donut mixture into the donut pan.

Bake in the oven.

Mix Cinnamon and Sweetener in a bowl. Melt the butter in the microwave.

Working one at a time brush the butter onto the donut then dip it into the coating, making sure to get both sides.